Calleguas will likely adopt on April 6 a declaration that a Stage 3 Water Shortage exists under its Water Shortage Contingency Plan, meaning all users, including Crestview shareholders, “should immediately reduce their water use by up to thirty percent and implement feasible water use efficiency measures.”  The draft resolution goes on:

BE IT FURTHER RESOLVED that, when Metropolitan formally adopts its water allocations for Calleguas, Calleguas will impose appropriate regulations, restrictions, and penalties . . . to implement mandatory actions to further preserve water supplies necessary to meet health and safety water demands.

The situation is so dire that the State Water Project will only release in 2022 enough water to meet Human Health and Safety requirements of 55 gallons per capita per day (“GPCD”).  Compare that with 175 GPCD actually being consumed in the Calleguas service area, and 540 GPCD in the Crestview service area. 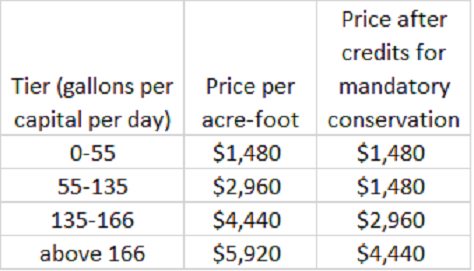 Historically, Crestview has enforced mandatory conservation measures imposed by its suppliers but has not imposed any additional mandates of its own.  Crestview Watch has no information on what mandatory measures to expect from MWD or Calleguas, but the incentives to impose them are obvious.

The general manager briefed the Crestview board on this March 31 and outlined some options, which he will be turning into a detailed plan to be considered at the April 28 meeting.  Some points he made to the board:

Crestview could get to 55 GPCD only by eliminating all outdoor water use (but there appears to be no mandate or financial incentive to do that).  55 GPCD equals 956 gallons per month per share, and our average shareholder has 3 shares.

MWD requests that water companies, like Crestview, with significant groundwater resources take no imported water at all in 2022.  In order to do that, Crestview would have to reduce consumption by 25%.

We will have to start buying Calleguas water in May because Well #4 will not be available before the end of May (but we can switch back when Well #4 is available).

Crestview’s policy changes need to apply May 1 through at least December 31, 2022.

The general manager seems to be relying mainly on rate increases to discourage consumption (and to pay the increased costs of Calleguas water).  There was a discussion of eliminating Tier 1 in the rates we pay, so that the first gallon consumed would be billed at the Tier 2 rate.  Other than that, no specific new rate schedules were discussed.

There may be a tradeoff between rate increases and mandatory conservation, and shareholders may want to weigh in on that at or before the April 28 board meeting.

An op ed by the general managers of MWD and Calleguas is here.

New to this newsletter?  Click on the Home tab and read earlier posts, or use the Search box to focus on a topic.  If this newsletter is useful to you, please forward it to other Crestview shareholders so they can sign up to receive future posts directly. Shareholders may comment below.